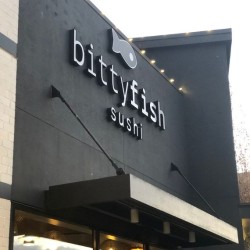 Tonight Sher and I had an experience new to both of us. Our daughter, son-in-law and grandson took us to a sushi restaurant set up like we had never seen before. Named the bitty fish sushi, it is not a sushi bar, but a sushi belt.

The sushi items offered were like most sushi places, with a variety of protein and vegetarian and vegan ingredients. What was different for us was the conveyor belt that was constantly moving. On the belt were circular metal pieces that held plates with the different menu items, each covered with a clear domed cover.

You simply picked what items you wanted, took them off the conveyor and enjoyed them. It was easy to share, and each plate had four individual pieces of sushi.

Other plates ready to go on the belt 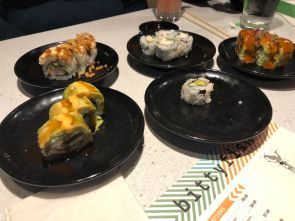 Another view of the conveyor

The restaurant also had soups, salads, teriyaki chicken and rice, fresh fruits and other ala carte dishes. We found this to be a most enjoyable dining experience, one new to Sher and I. It was fun sharing the different kinds of sushi, the drinks were good and the service was also outstanding. The bitty fish sushi was located in Alderwood Mall in Lynwood, Washington.

12 thoughts on “Went to a sushi belt, not a sushi bar”