A history and legend filled roadside oddity can be found on CR 400S outside of Amity, Indiana  which is south of Indianapolis in Johnson County. The story begins in 1808 when 14 year old Nancy Kerlin married William Barnett. The couple had 11 kids. 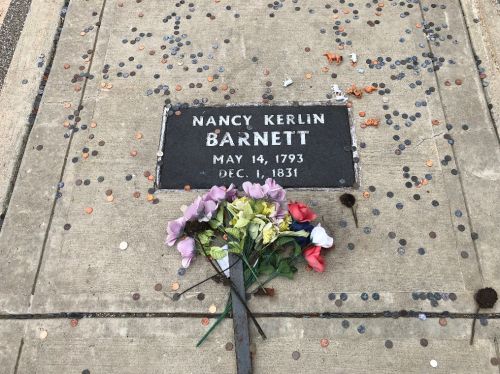 The only marker on the grave

Fast forward to 1831, the year of Nancy’s passing. She had a favorite spot on a rise overlooking nearby Sugar Creek. This became her final resting place. Stories say that others began to be buried there as well, creating a small country cemetery. A road was discussed through the cemetery, but Nancy’s son refused to move his mother, so the road went around her. 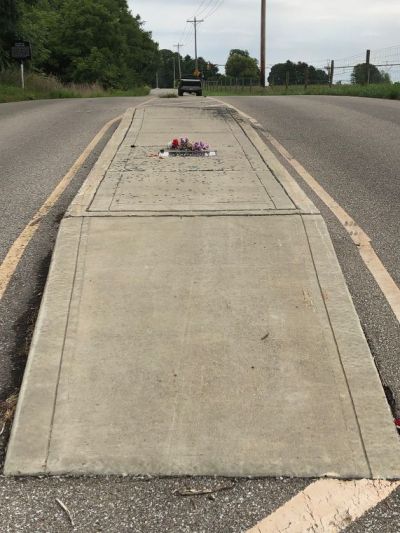 The road still splits around the graves

In the early 1900’s CR 400 was plotted out, again right through Nancy’s grave site. This is when her grandson Daniel Doty showed up with his shotgun refusing to allow any such activity. Don’t mess with Grandma’s grave! Thus the county said fine, they would run the road on either side of the grave. 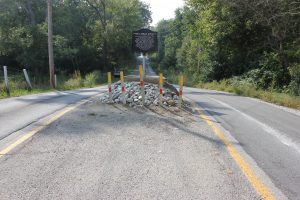 Over the years vehicle traffic, including large farm machinery, took its toll on both the protection barriers and the grave mound itself. Then in 2016 it was decided that the grave should be lowered and covered with a low profile concrete structure. Archaeology students from the University of Indianapolis excavated the grave and were surprised by the discovery of not just Nancy’s body but remains of six others. 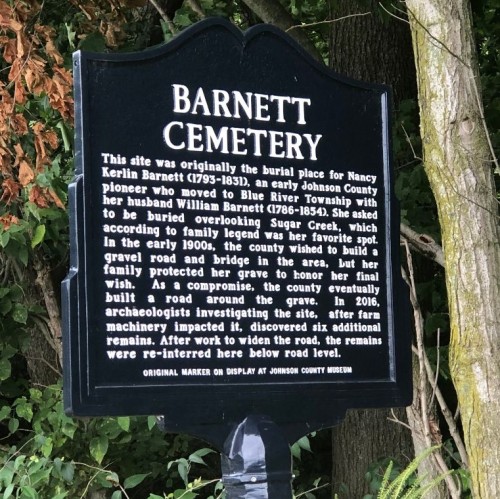 The bodies of two women, a man and four children were reburied in individual coffins. The low profile concrete structure now protects Nancy and other early Indiana pioneers. Today flowers and hundreds of coins adorn the surface of the grave in the middle of the road.