In 1940 the US War Department designated 56,000 acres in southern Indiana as a future munitions testing area. In May of 1941 the first round of ammunition was fired from the firing line. Thus began the long history of the Jefferson Proving Grounds (JPG). 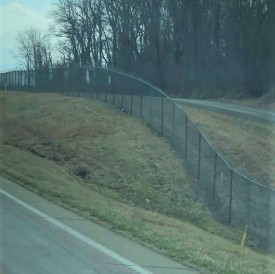 View from US Highway 421

Driving on US Highway 421 (the old Michigan Road) north of Madison, Indiana you’ll see on the west side of the road a long barbed wire topped tall chain link fence set back from the road. It runs for 17 miles. Inside the fence there will be another road, and US Govt. No trespassing signs evenly spaced on the fence. This is the old JPG site.

The JPG closed in 1995, but is still utilized by different entities. Part of the acreage is now the Big Oaks National Wildlife Refuge. Over 1000 acres is still used as a munitions training area for Indiana National Guard Aviation wings. A local railroad museum has a collection of rail stock on an old rail line within the site. Some areas are open for camping and seasonal permit hunting.

The following is from a Site Status Summary from this USNRC website: “JPG was established in 1940 for the purpose of production and specification testing of all types of ammunition, projectiles, propellants, cartridge cases, primers, fuses, boosters, bombs, and grenades. From 1941-1995, over 24 million rounds of conventional explosive ammunition were fired.” To this day there are areas within the old firing range that still contain millions of rounds of unexploded ordinance making those areas extremely dangerous.