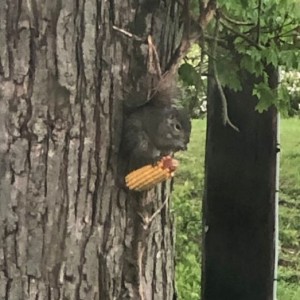 Yesterday during our “get out of the house for a change of scenery” adventure we somehow got on the subject of squirrels and feeding them. One thing led to another and we decided that we’d get some ear corn and mount it on backyard trees. Our son went into the Rural King store and got us a bag of ear corn.

We put one ear of corn each on two different trees in our backyard. When I first got up this morning neither ear had been touched. Then a second check a little later revealed that one of the ears was now completely devoid of kernels. The squirrel had moved to the second ear, which was on the tree closer to the house. It was grabbing a kernel and then burying it close to the tree. About every fourth kernel buried he would stop and eat one! The squirrel is, as I write this, continuing to take the kernels off this second corn cob.  Fun to watch, but now I have to decide how much corn to put out.

Oh, we also got a bird feeder. No action there yet. We’ll let you know…..

8 thoughts on “Watching the squirrel with the corn”