Sher and I have been looking forward to an evening of New Orleans jazz music as well as some good food. We went to the east end of the French Quarter to do some shopping to begin our evening. The eclectic nature of a lot of the shops makes the exploration of them a real treat. We did catch the tail end of the French Market, a large open air lot, some of which was under roof. Many vendor booths were filled with folks selling their wares. You would see everything from imported T-shirts and other clothing to hand made jewelry, leather, or other quality art work.

Under the roof portion of the French Market’s Flea Market. You’ll find everything from quality hand crafted jewelry to cheap imported trinkets.

Frenchmen Street is just outside of the French Quarter’s Decatur Street. A short two blocks worth, Frenchman Street is known for its live music clubs. The first bar we walked into was Bamboula’s. This venue used to be an old printing shop, and the ceiling and support posts were covered with pressed tin panels. The band was already playing so we sat down and had a drink. During the next two sets we enjoyed the music and the ambiance of the bar. 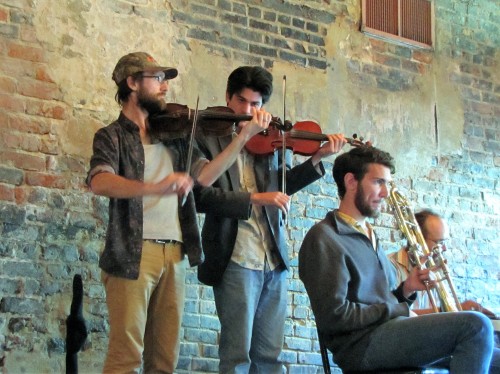 After we finished our drinks at Bamboula’s we struck out to explore Frenchmen Street. As we had arrived early several of the jazz bars were either not yet open or the band had not yet arrived or started to play. There were not a lot of people out on the sidewalks yet, and the places that were open were not really into the evening yet. We sat for about 5 minutes at one bar after having to ask for a menu. No one came by so we left. This actually was a blessing as we then went to the Maison at 508 Frenchmen Street.

Signs on Frenchmen Street of both the jazz clubs we enjoyed!

The Maison was a great venue for the bands we heard. The Baby Giants Jazz Band was playing when we went into tho the bar. These guys rocked the bar with some amazing jazz. I especially appreciated the trombone, as I used to play. The numbers performed offered several chances for instrumental solos. This always gives you a chance to truly appreciate individual talent. We started with a couple of tequila cocktails called “Dixie Revival”. Oh were they good! We then ordered our meals. The food was excellent and very reasonably priced.

One thought on “A shopping, food and music filled fun evening in New Orleans”