Lincoln’s tomb is in the huge Oak Ridge Cemetery in Springfield, Illinois. This is a State historic site, not a National property. The impressive structure is on top of a hill in roughly the center of the cemetery grounds.

You enter the tomb into a small round room. There were two volunteers in the room answering questions. The tomb itself is reached via a marble lined hall way with different bronze statues of Lincoln along the way.

You enter the tomb via the small door seen on the lower right of the structure.

Not a clear photo, but this shows the hall leading to the tomb. 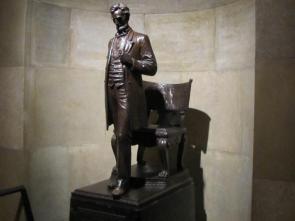 One of several depictions of Lincoln in various places in the walkway.

Once you have seen the marker for Lincoln and the internment wall behind which are Lincoln’s wife and children you continue out another hallway. This was a very somber and, for me, emotional time. All of Lincoln’s history, the tragedy of the Civil War and his untimely death seemed to rush to the forefront of my thinking. 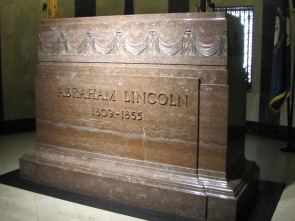 Lincoln’s casket is actually behind and 10 feet below this massive marker. It is encased in steel reinforced concrete.

Lincoln’s children are also here next to Mrs. Lincoln

One of four statues representing the Infantry, Cavalry, Artillery and Navy that fought in the Civil War, and that Lincoln commanded.

The photos do not really do justice to the magnificence of the exterior and the interior of tomb. This is a true must visit site if you are near Springfield.