The Eagle’s Nest monument on the National Road (US 40) was erected around 1916 after a 29 mile stretch of the then unimproved and often nearly impassable road was replaced with concrete. The stretch of highway ran from Zanesville to Hebron and is east of Columbus. It is at the highest elevation of the road in Ohio.

The monument is a large granite rock with some interesting inscriptions carved into the surface. The photos show some of the details of the inscriptions, including a Conestoga wagon and mileage to Cumberland, Maryland, the starting point of the road. The completion of the experimental concrete stretch of the road led to a large parade when it opened.

Conestoga wagon etched into the granite

Ironically the day we stopped here the conditions were very muddy and wet. What a reminder of some of the early muddy conditions that the early travelers faced as they traveled across country. 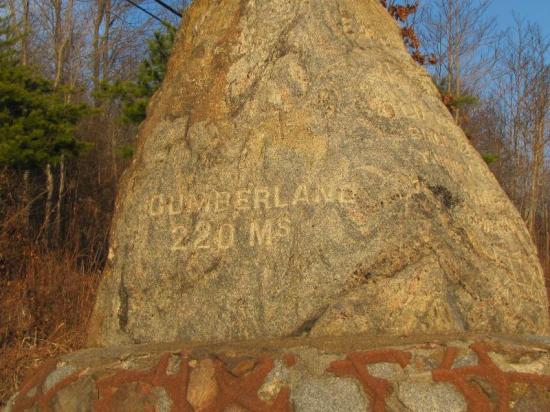 You are 220 miles from the start of the National Road in Cumberland, MD.

6 thoughts on “National Road “modern improvements” in Ohio in 1916”