During one of our trips from Indiana to the west coast we stopped in Hannibal, Missouri. Famous for being the home of Samuel Clemens, also known as the author Mark Twain, Hannibal is a really interesting and very historic small town on the banks of the mighty Mississippi River.

Mark Twain is of course everywhere, both in name and in picture.  One local restaurant proudly proclaims that it has Mark Twain fried chicken on the menu. Hmmm I didn’t know that Twain had scooped the colonel.

” the extensive view up and down the river is … one of the most beautiful on the Mississippi.”

The original homes of Clemen’s family and those of other real life people who became the fictional characters in the Tom Sawyer and Huck Finn books are open for tours. 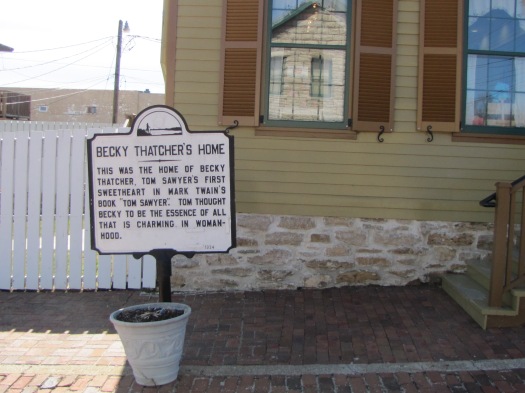 Tom Sawyer’s first love, Becky Thatcher, who existed in real life when Clemens was but a young lad

In addition to all the Mark Twain attractions, this river town is filled with some magnificent old Victorian homes, some restored, some in the midst of restoration and some in need of immediate attention.