Sycamore on fire on backside

Today was the first day in about a week when the sun was out and the temperature was above freezing. We were driving on a road next to a city park when our son noticed what looked like smoke  coming from the tree line at the edge of the park. Not thinking much of it,  we drove on, and saw lots of geese on the river past the park. But, we all kept taking about that smoke we saw. We circled back around and drove into the park where the small column of smoke still billowed.

Lots of equipment for one tree 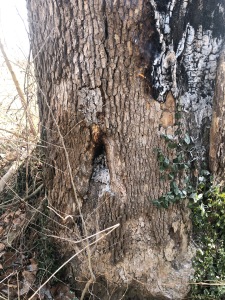 Well, a few minutes later here came one of the city’s large aerial ladder trucks.  Two firefighters got out of the truck, one with a water extinguisher and went to our smoking tree. Long story short, they determined that the tree was hollow, and the “blaze” no doubt started by homeless people. Two other trees in this park had also had evidence of a fire started at the base.

They kind of knocked down the embers on the charred trunk. The Street Department was called. Those two fellows said they were ok if they let it burn, and eventually it would fall into the river. The Fire Department agreed. So there is now an old hollow sycamore tree slowly burning on the edge of a city park. Hope the city is right and it will fall towards the river instead of into the park.