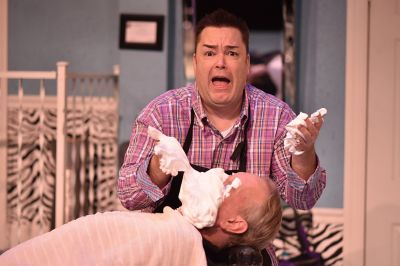 This hilarious production features madcap improvisation blended with the clues that reveal the person responsible for the murder of the old lady upstairs in the salon. The audience gets to spot clues, interrogate suspects, and solve the mystery. No two shows end the same, leading to repeat customers who enjoy the madcap mayhem. Set in Indianapolis, the play features many funny references to the local area.

Shear Madness has won tons of awards, including “Best Comedy of the Year” multiple times, and has been inducted into the Comedy Hall of Fame, the first stage play to be so honored. It will run through February 5. Tickets range from $58 to $70 and include Chef Odell Ward’s famous dinner buffet. For tickets visit Beef and Boards or call the box office at 317-872-9664.

Sher and I have not been to B&B since October 2019. We can’t wait to get back to our favorite theater!