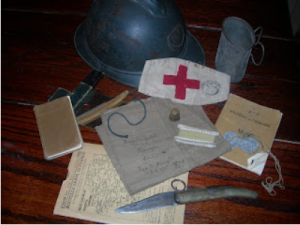 On November 11, 1918 the Armistice between Germany and the Allies was signed, ending the War to End All Wars. The guns on the Western Front fell silent. My grandfather, Rex R. Forsyth, was in France that day still serving in Section 625 of U.S.A.A.C. (United States Army Ambulance Corps) while attached to the French Army. He volunteered, learned to drive the Model T ambulances in the Allentown, Pennsylvania fairgrounds, and was soon shipped overseas. His unit was part of the Allied Army of Occupation and was stationed during 1919 at Kaiser Wilhelm’s castle in the Black Forest. 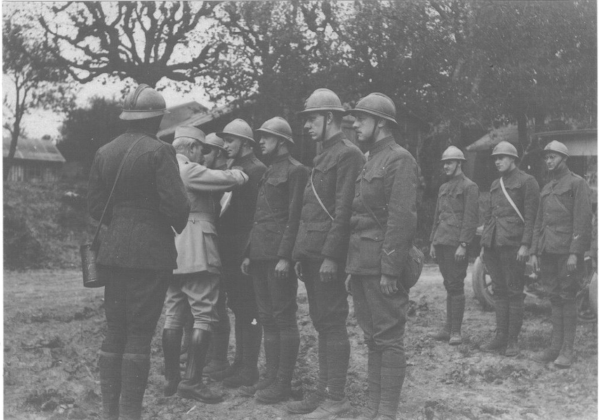 Shown is Colonel Bertrand, 162nd French Infantry, pinning the Croix de Guerre on the coat of Rex Forsyth. Note that the helmet Rex is wearing is shown in a photo above, and also note in the right background that you can see the front end of one of the Model T Ford Ambulances.

My grandfather was a true hero. On May 2, 1918 members of U.S.A.A.C. Section 625 were awarded the Croix de Guerre for bravery in action on April 17, 1918, having crossed a “zone violently bombarded by the enemies artillery” to continue to remove wounded from the battlefield. Our family is so fortunate to have his diary and photo albums of never published photos.

Armistice Day was officially authorized by Congress in 1938 to honor the veterans of WWI. In 1954, after both WWII and the Korean War, the original Act of 1938 was amended to replace the word “armistice” with “veterans”. November 11th has been Veteran’s Day since then, with the exception of a few years in the early 1970’s.  Regardless, remember all veterans and thank them for their service to our country.