We noticed a neat park on the Mississippi River levee at the town of Kenner, Louisiana. I turned into the parking lot because I saw an interesting statue. It was, in fact, a statue of a couple of men in boxing stances. I had to see what this was all about. Here is a picture and a little history. 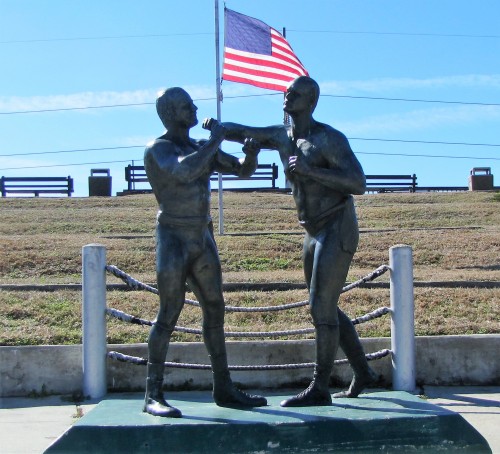 On May 10, 1870, a trainload of about 1000 people left New Orleans for the little town of Kenner, a few miles from NOLA. The purpose of the trip was to visit an old sugar house near the banks of the Mississippi River. In that house was a makeshift boxing ring. In that ring a fellow from Beeston, Norwich, England named Jed Mace was the victor over another Englishman named Tom Allen from Birmingham. The 10 round bout was a bare knuckle affair. What made it special was that it was the first World Championship Heavyweight Prize Fight in the United States.

The park offered a great view of the river as well as access to a long trail on top of the levee. Kenner is a quaint little burg with quite a history. In addition to the boxing site, when Kenner was a Native American village it was the site of the landing of French explorer Robert Cavelier De La Salle’s landing in 1682. This was when he claimed Louisiana for France in the name of King Louis XIV.

View of downtown Kenner from the top of the levee

One thought on “Two Englishmen fight it out in 1870 Louisiana”