We had never been to  New Orleans before and we wanted a good campground that was reasonably close to the center of the action. We did our due diligence by looking at some RVer’s comments online, maps of the area and of course rates and availability of RV parks in the area.

Our site at the NOLA West KOA

We did settle on the New Orleans West KOA. This is the only KOA near New Orleans. We found the staff to be very friendly when we arrived and checked in. All of the sites are on concrete and are back in. Most are very deep, allowing for big rigs. All sites have full hook-ups including cable TV and WiFi, which worked sporadically. There is propane filling and a nice laundry room. 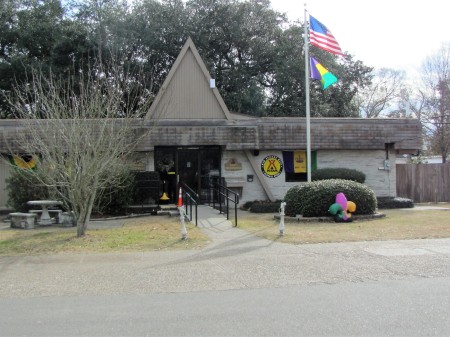 The office and store. Restrooms and showers are also in this building. The pool is open from April to October.

The campground offers a free shuttle to down town next to the French Quarter. It leaves at 9 AM and returns at 5:45 PM daily.  The KOA staff will help you arrange different tours if you want their help. There are tons of tours of various New Orleans attractions, and the KOA staff can help with what’s good and what’s not so good! We did use the shuttle one day for the return trip. The driver was fun and gave us a narration all the way back.  Uber and Lyft drivers were within a very few minutes of the KOA both times we ordered them.

This is a comfortable campground. The roads are a little rough and some of the concrete pads need a bit of help in the levelness category. Fortunately ours was level, no need for tire blocking. Go ahead and book your stay at New Orleans at this facility.  The rates are reasonable, it is only about 20 minutes from NOLA, and the free shuttle is quite a nice a bonus. We give this park a 5 out of 5. Here is their website.

St. Louis Cemetery No. 1 was established via a Royal Spanish Land Grant in 1789. It was originally outside the city limits, and was at least twice its current size. The Archdiocese of New Orleans now has control of this cemetery. Currently the only way you can get into the cemetery is with a licensed tour guide. Unfortunately vandalism has forced this action. 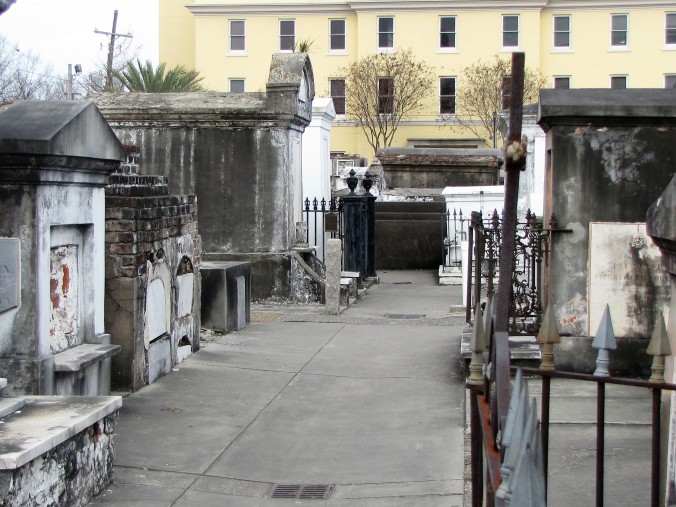 Multiple designs for the tombs, some fancy and some plain

The famed above ground tombs and wall tombs are designed for use by generation after generation. Many of the tombs are owned by individual families. Some of the very large tombs are known as society tombs where several families or groups have combined resources.  The laws dictate that a year and a day passes before an additional burial is permitted. As you would expect, there are many well-known, famous and infamous people whose tombs are located in the cemetery.

We are standing in front of the tomb of Marie Laveau, the famed Voodoo Queen. This is reportedly the most visited tomb in New Orleans.

We decided to go on a St. Louis Cemetery No. 1 and Voodoo tour put on by the Gray Line. Marcia, our tour guide, was a delightful host of our small group. As mentioned above, you must be with a licensed tour guide to gain entrance into the cemetery. Shop around, but we suggest going with the Gray Line Tour Company. 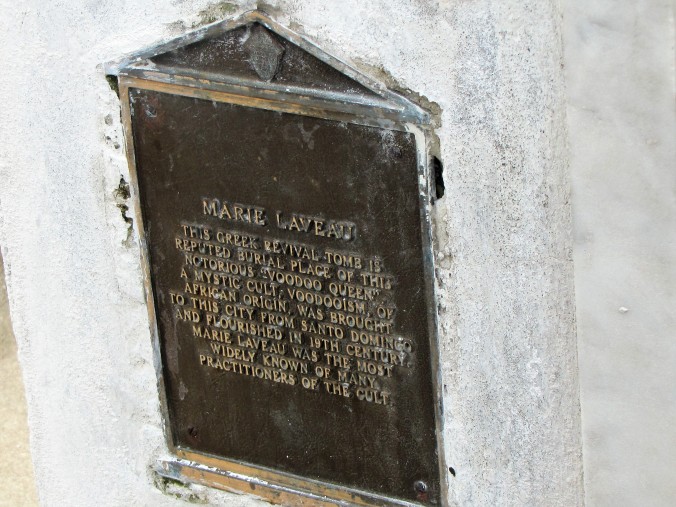 Plaque on the tomb of Marie Laveau, the most famous voodoo Priestess from New Orleans

Nicholas Cage had this tomb built in the cemetery. The only script on the tomb is the Latin phrase, omnia ab uno, which translates roughly to “all for one” or “everything for one.” Cage says he wants to be buried here, and the IRS cannot touch the asset of a burial plot. We were told that Cage visited the tomb a year ago with his brother.

Not all tombs are as well maintained as others.

Multiple generations of the same family interred in a wall tomb.

We noticed a neat park on the Mississippi River levee at the town of Kenner, Louisiana. I turned into the parking lot because I saw an interesting statue. It was, in fact, a statue of a couple of men in boxing stances. I had to see what this was all about. Here is a picture and a little history.

On May 10, 1870, a trainload of about 1000 people left New Orleans for the little town of Kenner, a few miles from NOLA. The purpose of the trip was to visit an old sugar house near the banks of the Mississippi River. In that house was a makeshift boxing ring. In that ring a fellow from Beeston, Norwich, England named Jed Mace was the victor over another Englishman named Tom Allen from Birmingham. The 10 round bout was a bare knuckle affair. What made it special was that it was the first World Championship Heavyweight Prize Fight in the United States.

The park offered a great view of the river as well as access to a long trail on top of the levee. Kenner is a quaint little burg with quite a history. In addition to the boxing site, when Kenner was a Native American village it was the site of the landing of French explorer Robert Cavelier De La Salle’s landing in 1682. This was when he claimed Louisiana for France in the name of King Louis XIV. 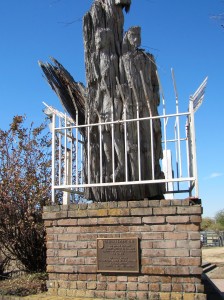 View of downtown Kenner from the top of the levee

For our first trip to the New Orleans French Quarter I had picked out the Gumbo Shop restaurant as a place for Sher and I to have lunch. We had taken an Uber ride to St. Peter Street from our campground. The Gumbo Shop is located in a building of Spanish colonial style that was built around 1795. The original building on the site was destroyed in the massive fire of 1794 that wiped out New Orleans.

Open air patio seating looking towards St. Peter Street (note the propane heaters that have been required during the past cold weather)

The doors opened at 11 AM, and we were the first patrons seated. We decided to take a table in the back area. You had to walk through an open to the sky patio area. Had it not been raining off and on we would have taken a patio table. 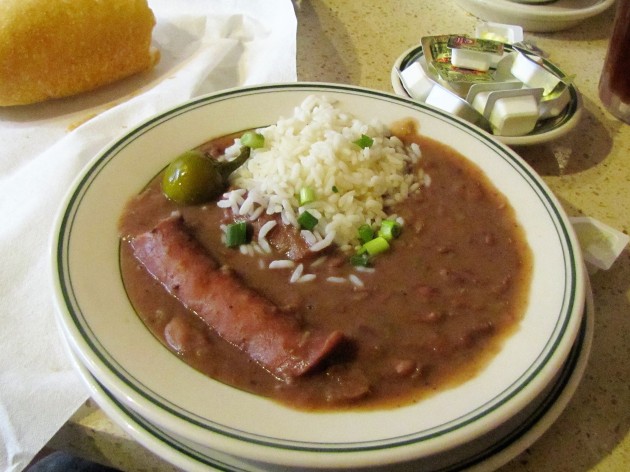 I later learned that red beans and rice is a traditional meal to eat on a Monday in NOLA. It seems that way back in history the women would do the weeks laundry on Mondays. This prevented the preparation of a large evening meal. So the ladies would toss ham bones or any other leftovers from the previous week into a big pot with red beans to cook all day. Served with rice that night, it became a Monday meal tradition that is still served today.

Perhaps we ordered the wrong items, or we just did not like the cuisine. This restaurant has received several awards and accolades. The pricing was reasonable at $4.99 for the cup of gumbo and $10.99 for my red beans, rice and sausage. Here is their website if you want further information.

New Orleans is a remarkable city with seemingly unlimited visual scenes. Here are some photos that we took during our first day in The Big Easy.

For some reason, only mules are used to pull the carriages that drive around the town. 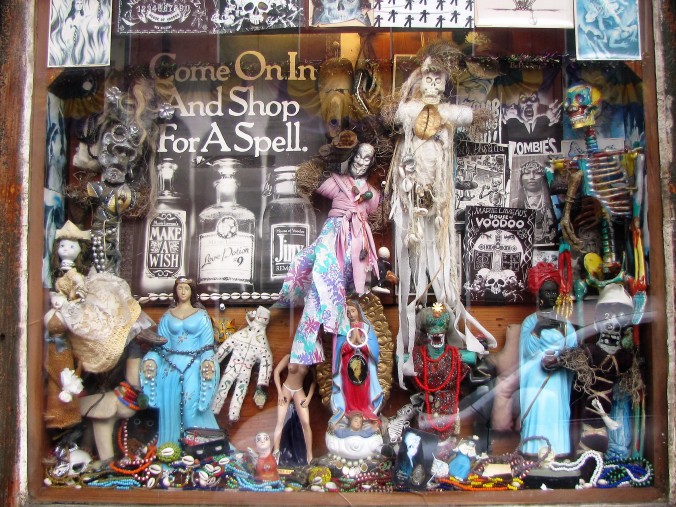 Above ground tombs in St. Louis Cemetery No. 1. Only tour groups are allowed into the cemetery to help control vandalism

Bourbon Street in New Orleans, known for music, food and revelry. Note the famed balcony iron work in the background

Today was our first day in New Orleans. Even though our KOA campground offers a free shuttle to the French Quarter at 9 AM, we decided to have a relaxing morning and take our time in leaving. We used Uber and went down to the Gumbo Shop restaurant for lunch. (I’ll have a review up later.)

Have to admit I’ve never seen a Voodoo Shop before

After lunch we strolled down around the French Quarter. If was fun stopping in some of the shops along the way. In addition, we saw some street performers. Several musicians were playing some great jazz. A street “mime” was striking a pose and holding it until someone dropped money into his bucket!

The classic iron railings on the balconies of the French Quarter

We had also made reservations for a “Cemetery and Voodoo” tour. This 2 1/2 hour bus/walking tour was put on by the huge tour company Gray Line. We were fortunate in that only two other couples had tickets, thus there were only 6 of us on the tour. Our tour guide was very good, and with just three couples on board it was almost like having our own private tour. Seeing the famous St. Louis Cemetery with its above ground tombs was spectacular. More to come later  about this tour! 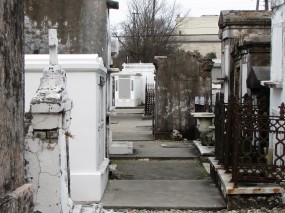 St. Louis Cemetery No. 1, now open only to registered tour groups because of vandalism.

After our tour was finished we walked to the Cafe Du Monde, famous for coffee and those unique pastries called beignets, pronounced ben-yays. The coffee was super strong and good. The beignets were simple: fried dough smothered in powdered sugar. And they were indeed very, very good. We’ll let you know what else we see and do over the upcoming days.

With good intentions we left Austin striking out for New Orleans. However, old man winter threw a monkey wrench into not only our plans, but just about the entire eastern half of the country! On our way east, we had stopped at a couple of casinos in the Lake Charles, Louisiana area. We were beginning to hear about the potential for bad weather, so we decided to make another casino stop and see what developed.

The casino is worth a stop. On Tuesday they offer their huge buffet to seniors (55+) for just $5.50. Can’t beat that!

The Coushatta Casino in Kinder is north of I-10. Not only is it very large (100,000 square feet according to the casino website) but is has an excellent RV park. The sites are all concrete, level and with full hookups including cable and a strong WiFi. Yes, I said a strong, reliable WiFi service! A shuttle bus will pick you up at your site for transport to and from the casino. And for only $22 a night, it is a great value. 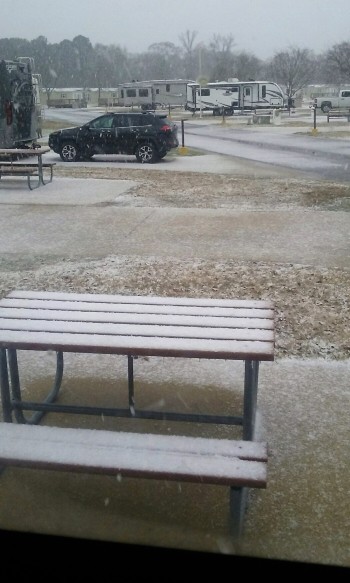 The RV park was covered with a sheet of ice. You can see the sleet/snow falling. I took this picture from our RV.

The day after the storm hit at night, I-10 was closed in many spots from Lake Charles to Baton Rouge and New Orleans. What a mess! There was a sheet of ice throughout the RV park, and the shuttles had to take it very slowly. The temperature dipped to about 15 degrees. I-10 is closed again tonight, so we will have to decide if we need another night here at the casino.