Around midnight on May 19, 2012, Shelbyville, Indiana residents saw flames raising hundreds of feet in the air. The source of the flames, visible from over a mile away, was the historic all wooden grandstands at the Shelby County Fairgrounds. These grandstands were constructed back in 1879, and records show that 6000 board feet of white pine was utilized for the build. Over 130 years later, the wood was tinder dry and the entire structure was fully involved when firefighters arrived on the scene.

The history of the Shelby County Fair goes way back to original farmer’s markets in the late 1840’s. The legal organization came in 1873 with the writing of the Fair Constitution. Future Vice President of the United States Thomas A. Hendricks took part in the authorship and execution of these documents. The first fair under the Shelby County Fair Association name was in 1874. 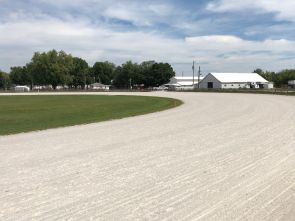 Stables in background, turn 3 in foreground 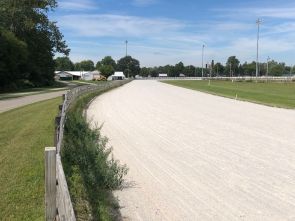 The grandstand, as mentioned above, was built in 1879 at the same time the race track was being renovated. This track is known as one of the fastest tracks in the state due to it’s design, which was a duplicate of the world-famous Kentucky Derby track at Churchill Downs in Louisville, Kentucky. Horse farms from all over have trained on this track for decades, and still continue to stable and train in this facility.

The new entrance to the grandstand 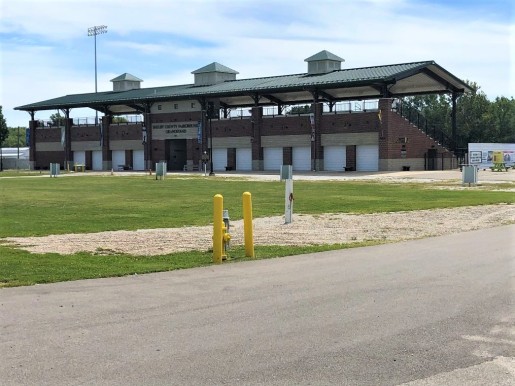 The burning of the grandstand in 2012 a couple of weeks before the scheduled opening of the fair was a shock to this small Indiana community. The temporary portable bleachers just didn’t quite get it. However, in 2014 the new grandstands were completed. with the same basic design, but now constructed with brick and concrete, both fireproof!

12 thoughts on “Fire destroyed the 1879 grandstand ten years ago”