It is just being reported that the Washington Redskins are now going to drop the name and the logo. One of the oldest of the National Football League teams, the Redskins name was adopted in 1933. The new name and logo has not been revealed.  The Redskins name has been denounced by many Native American groups for years. It has been, and still is considered by the groups to be an ethnic slur. 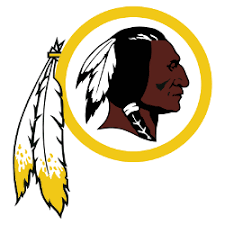 18 thoughts on “Washington Redskins drop their name and logo”