Freddy Powers Pickin Party is where we spent New Years Day.  A New Years black-eyed pea and cabbage potluck was held at the community center at the La Hacienda RV resort where we are staying.  The party was fantastic!  We had a wonderful afternoon and evening with new friends.  We were fortunate to share our table with our son and his family and with The Singing Cowboy, Freddie Fuller.  His website is The Singing Cowboy.net and he is a wonderful performer.  We enjoyed his music and loved being able to socialize with him and his friend Debbie.

Tonya Benson is with Songwriters Across Texas, an organization that supports and showcases musical talent in Texas.  She sat with us for awhile and shared her fun and interesting work with musicians in Texas.  It was a fun time with good food, good music and meeting some excellent musicians who perform all around the country.

More details will follow later as we write about some of our favorite performers.

Jason Coleman is the grandson of famed pianist Floyd Cramer. If you don’t know Floyd, you do know his music. Sher and I were lucky enough to hear a concert by Jason at the Park Place Estates RV Park where we are official Winter Texans in the Rio Grande Valley this year.

Coleman puts his music heritage out there with a dedication and sincerity that he gets honestly. His show not only is performing classic songs, but also a fascinating  look into the history of Floyd Cramer’s signature style of piano. Cramer’s piano is heard on just about all of the greats of country and rock from the fifties and sixties and beyond. 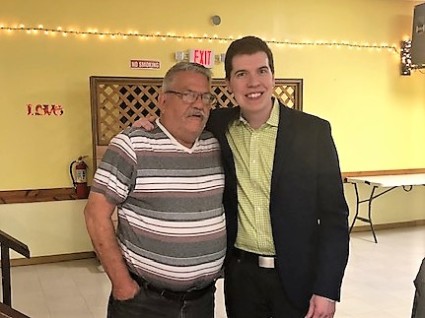 I had a nice chat with Jason

Applause from the large crowd rippled through at the start of most of the pieces Jason shared with his audience. He personality and the nostalgia of the music is magic. Not only did Jason play the tunes, but he also shared some poignant video of his time as a young man with his Grandpa Floyd. These clips included his performances with Floyd on TV.

Of the entertainment shows offered at the park, we both agreed that Jason Coleman’s performance has been the best.   I recommend that you check his website here for his concert schedule and available CD’s.