Interstate 275 is the beltway that runs around Cincinnati, Ohio. A portion of this beltway crosses the Ohio River 20 miles west of downtown as it runs between Indiana and Kentucky. In 1968 construction began on a four lane continuous steel arch-shaped truss bridge. It was completed in 1977. 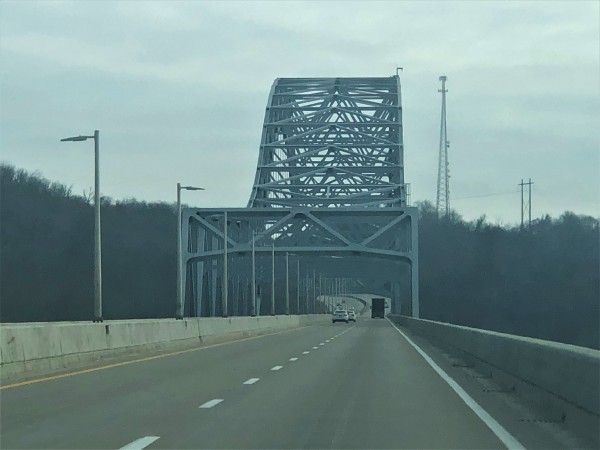 Approaching the bridge, Kentucky ahead 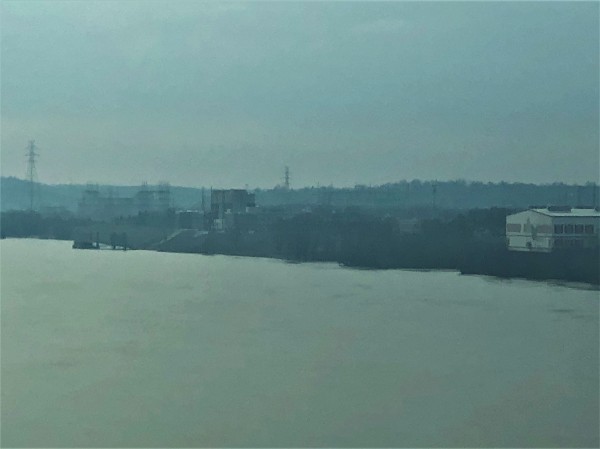 Looking downriver from the bridge, you can see the pier at the Lawrenceburg landing in the water. The pier is the header picture at the top of this post.

We crossed this bridge twice on our day trip last weekend. It is quite impressive, and stands out when you are on the riverfront in Lawrenceburg looking up river toward the bridge. This is also the bridge that ultimately was responsible for the end of service of a small local ferry. 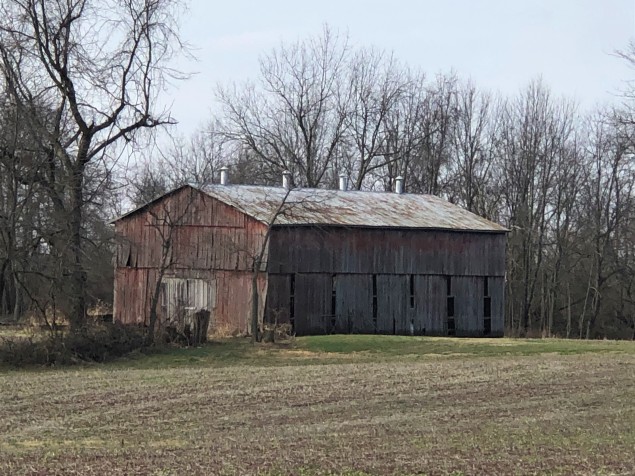 We spotted this old tobacco barn from the I-275 interstate in Kentucky. These barns are used to hang tobacco plants after they are cut at their base. Burley tobacco plants can grow to a height of six feet. The barn’s missing siding boards and roof vents enable the large leaves to dry before they are baled and sold. Beyond the barn is the Ohio River. 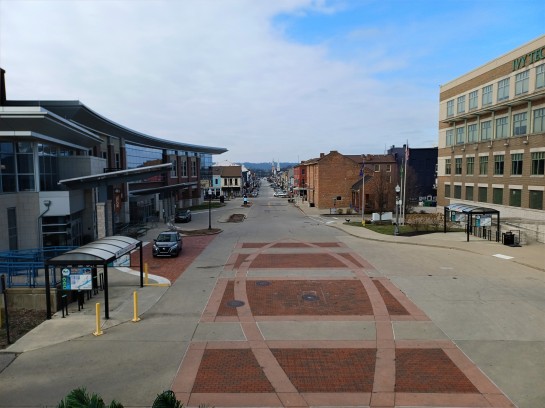 Even though it was a very cold and breezy day on Saturday, we still enjoyed a very nice day trip along a stretch of the Ohio River. It was one of those no itinerary trips. We just drove around and took in the sights. 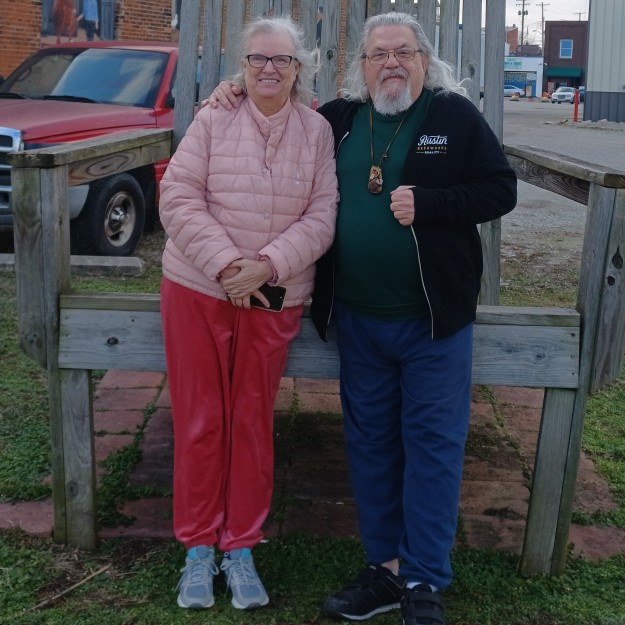 Standing in front of a large wood chair in Aurora

We took the I-275 interstate bridge over the Ohio River into Kentucky and drove through the Creation Museum grounds. Returning to Indiana we stopped at Lawrenceburg, followed the River Road and went as far as Aurora.  All in all we had a wonderful and exciting day as we took in the sights of southeast Indiana.

The Miami Fort Power Station is located on the banks of the Ohio River in Hamilton County, Ohio immediately east of the tripoint of Indiana, Kentucky, and Ohio. This power plant is a dual-fuel power generating facility, consisting of a major coal-fired electrical power plant that is supplemented with a small oil-fired facility. 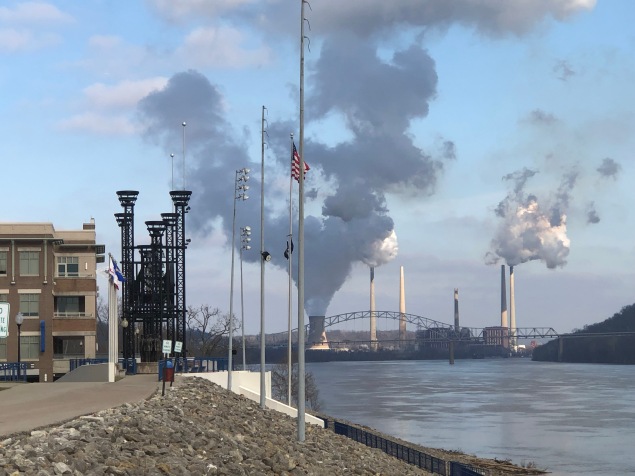 With its origin dating back to the first coal fired unit in 1949, the most recent coal unit was commissioned in 1978. Oil fired units were commissioned in 1971. The facility was originally owned by Cincinnati Gas and Electric Company (CG&E) which became Duke Energy. Currently Dynegy is the owner. 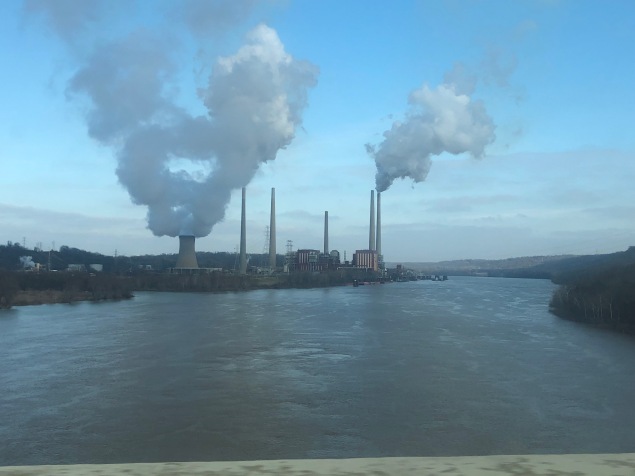 The huge plant is impossible to miss when you are traveling on I-275 crossing the Ohio River. It is east of the bridge and the columns of smoke at times are dominant in the skies. As of this writing two coal-fired units have been decommissioned. It has been announced that by the end of the year 2027 or sooner the Miami Fort Power Station will be retired.

We had a marvelous Christmas with great food, some nice presents, but most we had precious time with our family. Sher and I were really ready to get back on the road though. It did not take too long to get the RV loaded with the clothing we would need as we headed south. It was way too cold to even think about de-winterizing the RV’s water systems. It was 11 degrees when we hit the road for lands south. 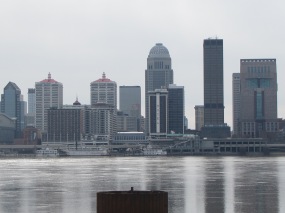 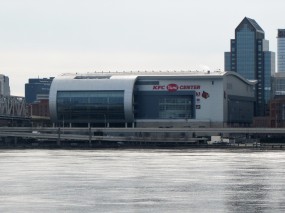 KFC’s “YUM” Stadium on the riverfront at Louisville

We stopped on the Indiana side of the Ohio River across from Louisville for a short break and to get some pictures. We will stop on the other side of Nashville, Tennessee tonight. 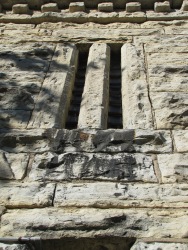 Thick walls and narrow windows of the jail

Bardstown, Kentucky is in Nelson County and is in the heart of the Kentucky Bourbon industry. Bardstown is also home to one of the oldest jails in the area. The original jail structure (now called the front jail) was erected in 1819 and was used until 1874 to house prisoners. In 1874 the “back jail” was built and held inmates until 1987. During this time the front jail was the jailer’s residence. The facility is now a Bed and Breakfast using the rooms in the old residence.

The history of this place is fascinating. You can (for a fee) take a tour of the back jail, with many of the jail cells untouched since the last prisoners left in 1987. There are original photos, some of which show the last hanging that took place in 1894 in the yard in back of the jail.

The structure is quite the fortress! The walls are every bit of 30 inches thick with large metal bars covering the narrow windows. There are mason’s marks on the huge stones where hooks were used to move them into place during the construction. The original wall surrounding the back yard is complete with massive solid metal gates.

There are some nice RV parks in the area, including My Old Kentucky Home State Park. Be sure to check out the old jail and the other attractions in and around Bardstown. 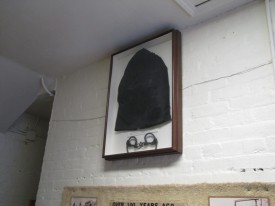 Hood and shackles for the 1894 hanging 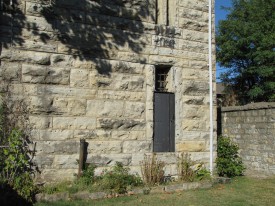