Sher and I are not traveling now due to coronavirus, so we thought we’d share some of our BC pictures with you. (BC = before COVID-19)

One of my favorite places on Earth is the Sonoran Desert in Arizona. This photo was taken in the Western Mountain District a few minutes before sunset. The stunning landscape is dotted with the magnificent saguaro cacti.

After being disappointed with the town of Tombstone (see article here) I decided to see if we could park at the lot next to the Boothill Graveyard. Boothill is now on the National Register of Historic places. According to a plaque the graveyard was restored by Tombstone residents in the 1920’s.

The final resting place of some of Tombstone’s most colorful people is well maintained now. All of the graves look pretty much the same: a pile of rocks and simple wood markers. A few graves have fencing. The entrance to the graveyard is through a souvenir shop. They request a $3 “donation” for a flyer with the grave locations marked.

This was an interesting attraction. The graveyard is portrayed as being authentic, however you have to wonder about the spacing of the graves. The spacing is almost too perfect. The sayings on some of the graves are pretty humorous.

We were able to park in the lot, however any rig over 25′ will not be able to park here. I was able to find a spot and back in ok. 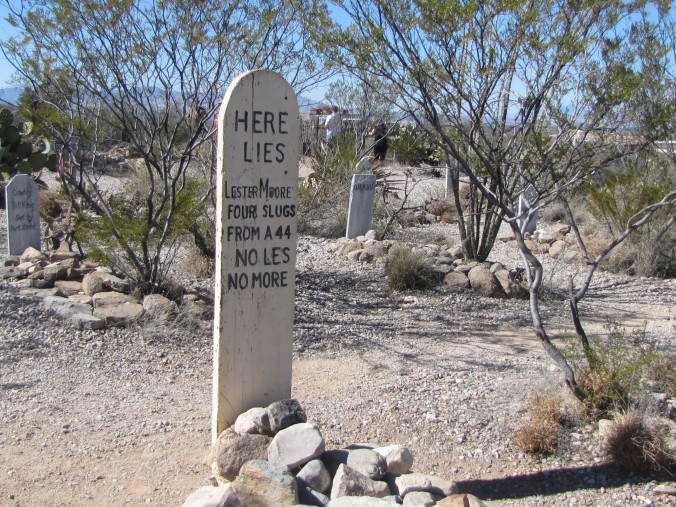 Sher and I had planned on a visit to the ‘historic’ town of Tombstone since we were in Tucson. We decided to drive there on our way back east.

Well, we were disappointed. There was literally no parking available anywhere close to the main street. Signage directed us to an RV and trailer parking lot that was at the bottom of a very steep hill. This was too steep of a climb. The main street was blocked off to traffic so we could not get a chance to even drive by ‘the sights’.

All of the sites either charged admission or were simply a place to spend your money, either food, drinks, or merchandise. The famed OK Corral was actually walled in with bleachers for the audience. Again admission charged. The town we felt has morphed into a tourist trap.

We did find some street parking (free) across from an antique store a few blocks away from the main street area. It had some interesting things that were priced pretty high, as you would expect.

Perhaps on an off day you can find parking. However with any RV or trailer combo of any length parking will be a problem unless you park in the lower level at the bottom of the hill. Tombstone may be fun for some, but for us the lack of close parking and the commercialism just turned us off.

We took a drive to the Tucson Mountain District of the Saguaro National Park one evening. It was a visual delight to watch the desert turn from the bright sunlight of the day into the subdued lighting of dusk followed by yet another night.

One by one the cacti lose the sun’s warmth 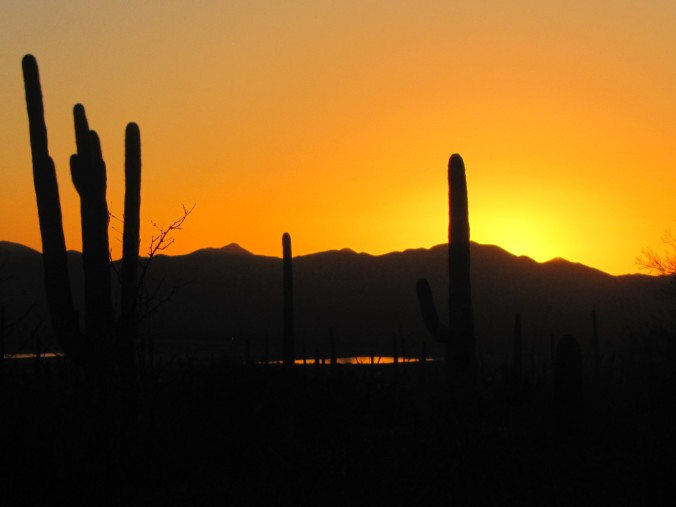 A beautiful blaze of the day’s last light

Cut and polished, packed and ready to go

Every year the city of Tucson hosts the premier showcase for dealers displaying and selling gems, minerals, fossils and jewelry. The 2016 show has 43 different locations around town. Over 4000 different vendors ship in specimens from literally every continent on earth. You will find acres of huge temporary buildings, tents, canopies and awnings set up in set areas around town. Free shuttles provide transportation from park and go lots.

If it has to do with minerals, gems, fossils or jewelry you will find it. Towering six foot tall amethyst filled geodes are found everywhere. Slabs of limestone the size of sheets of plywood are seen filled with amazing trilobite fossils. Any mineral crystal known to man is available for purchase.

Sher and I have been out several times this past week.We have not yet seen a quarter of the vendors or sites. While some dealers only sell wholesale to other businesses, most of the vendors will sell retail to the public. Bring some cash because you will find something you can’t live without!

Tons of jewelry, beads and other neat stuff 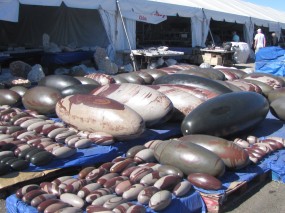 Sher and I were driving in our motorhome on the far east side of Tucson, following Tanque Verde Road, one of the main east-west routes. As we approached the foothills of the Rincon Montains the road became Reddington Road. We kept on driving enjoying looking at the houses, horse ranches and the scenery.

The dirt road at its widest

The road narrowed but I kept on, and soon there was a sign for curves, one of which was a 5MPH curve warning. This curve led to a steep, steep climb. At this point turning around was not an option.

The next thing we saw was a sign for the Coronado National Forest and the change from paved road to dirt/gravel road. No way to turn around, and no idea what was ahead. When a small truck came down the road towards us I flagged the vehicle down. The lady inside informed me that less than a mile up the road was a parking area where we could trun around. Whew!

We got turned around and stopped to get out and admire the view. Hundreds of Saguaro cacti covered the landscape. What an impressive sight they were! We were in but a small portion of the 1.78 million acres of the Coronado National Forest which covers portions of Arizona and New Mexico.

Oh, and by the way, I won’t head out on a road leading into the mountains again without doing some research! 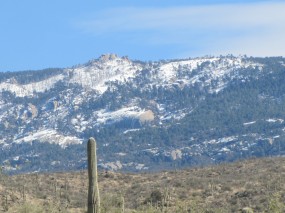 Sher and I went to the Rincon Mountain District one afternoon when we were checking out some antique and art stores on the far est side of Tucson. We stopped at the Visitor Center to pick up some information brochures and a map of the park. We did not have to pay the entrance fee because we have the America the Beautiful Senior Pass. 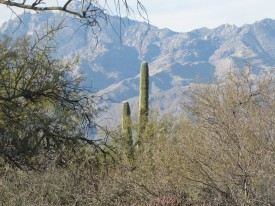 The beauty of the desert

The scenic loop drive is an 8 mile one way paved road that winds through a portion of the huge park. This will give you an up close view of the amazing cacti and other plants that populate the remarkable desert environment. You cant help but feel a connection to the marvels of the desert as you take this drive. There are many pulloffs and some “scenic” views. Get out, smell the air and take a little walk.

One thing that stood out to us was the individuality of each of the Saguaro catcti. The younger ones had a simple stalk. The Saguaro doesn’t start to grow the iconic “arms” until it is over 6 feet tall and at least 60 to 75 years old. Those old timers with several arms are in the 150 + age group!

Fort Lowell Park is now a large city park northeast of downtown Tucson. It is home to several ballparks and soccer fields. The ground is also the site of a former frontier Army fort. The original military post was opened in 1860 on the outskirts of the then tiny town of Tucson. This location was abandoned several years later and moved to the Fort Lowell site, seven miles northeast of downtown Tucson. The fort remained until it was decommissioned and abandoned in 1891.

The Fort was used as a staring point for several Army expeditions chasing down “renegade” Apache bands. Perhaps the most famous event that began at Fort Lowell was General Crook’s expedition that led to the “surrender” of Geronimo.

Today little remains of the original buildings. The old hospital building remains are the largest reminder of the original fort. The mud brick walls are now protected from the weather by a large shed roof. A fence now surrounds these ruins to keep them safe from vandalism. 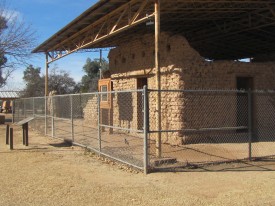 The Commanding Officer’s quarters has been faithfully reconstructed and houses a small museum. The museum houses fascinating displays covering the life and times of life on a frontier military post. Military uniforms, saddles and weaponry are there for up close examination. Civilian history is also told.

Take time to visit Fort Lowell. As you walk the old parade grounds you can imagine the cavalry troopers in formation as the infantry marches into place for the sounding of the evening gun. Look at the large statue of a mounted bugler: let your mind travel back to Tucson in the 1880’s.

Once a year the old fort is the location of the Fort Lowell Day Celebration. Normally the second Saturday in February, this event is packed with activities including Cavalry drills, period bands, walking tours and of course lots of food vendors. Visit the Arizona Historical Society website for details.

About 10 miles south of Tucson, Arizona you will find the “White Dove of the Desert” also known as the Mission San Xavier del Bac. This magnificent Spanish mission was completed in 1797. The first Spanish missionary, Father Eusebio Kino, arrived at the site in 1692. Throughout the years the location has been part of New Spain, Mexico, and finally a part of the U.S. after the Gadsen Purchase of 1854.

When you enter the church you cannot help but be amazed by the incredible amount of 18th century statuary and murals. The impact varies for everyone who walks the interior of this powerfully spiritual place. Candles are always lit and displayed. A shrine to St Francis is a prominent feature and one of solemn devotion.

The edifice is still a functioning Catholic Church that primarily serves the Tohono O’odham tribe, formerly known as the Papago. There is a museum the shows the history of the church however it ws under construction during our visit so we missed much of the displays. There is also a gift shop.

Being one of the most popular tourist stops in Tucson, we were fortunate to visit when there were very few people there. It was almost as if we had the place to ourselves. This is a site that is filled with history as well as a sacred place for contemplation, meditation and prayer. Do not miss a chance to visit San Xavier. You will be moved.

The San Xavier website is packed with information for your visit planning assistance. 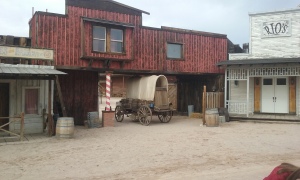 Old Tucson is a fascinating attraction west of the city of Tucson, Arizona. The property was first developed in 1939 when Hollywood movie studio Columbia Pictures wanted a suitable location for a western feature film. Over the years over 300 film and television shows have been filmed there. John Wayne filmed four times there including “Rio Lobo”. Several well known western themed TV series were produced at Old Tucson.

While there are still films made there as well as TV ads and music videos the primary use is a neat and fun tourist attraction. The buildings look like they came right out of the movies. Fancy that. Once you get in the grounds there are activities shows and events every half-hour. See a rousing musical show featuring real dance hall girls. The highlight for us was the live actor short shows including a demonstration of stunts used in the movies. The actors were terrific, had a great sense of humor and interacted with the crowd to the delight of all.

We spent about four hours at the Old Tucson movie studio. The weather was rather chilly and the crowds were not at all large. A great day to visit, althogh another 10 degrees or so would have made the day perfect.

Go see Old Tucson movie sets and theme park when you travel through Tucson. Tickets are a little pricey but they do offer senior discounts with ID shown. Here is the Old Tucson website. 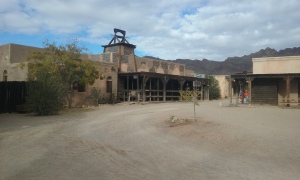