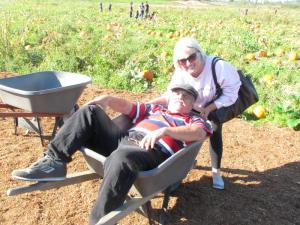 Today at the north end of Snohomish Valley, Washington it was absolutely beautiful with clear skies and temps in the low 70’s. A perfect day to go to a U-pick pumpkin patch! Sher and I went with our daughter and son-in-law to Carleton Farms. They had a lot of October type stuff to see and do. This place has a year round farm market, and their pumpkin patch was huge. It probably covered at least five acres.

Hay ride to the pumpkin patch! (That is the kids zip line on the right.)

A covered wagon hay ride took us down to the pumpkin patch. I’ve never seen so many wheel barrows lined up for your use! The place had lots and lots of people there, mostly families with kids of all ages. It was fun watching the little ones with eyes light up in awe of the hundreds of pumpkins on the ground.

A tiny fraction of the pumpkin picking area available.

We spent about half an hour or so picking out the pumpkins we wanted. It was amazing that there were so many different sizes and shapes available all still on the vine. There were kid sized zip lines too.

One of the pumpkin cannons. The range of this cannon was very impressive!

At the top of the hill the farm had two pumpkin cannons set up. These compressed air powered cannons were hurling small pumpkins for hundreds of yards into a corn field. Some went farther into a nearby stream, creating quite the splash on impact. Kids were really enjoying firing these cannons and watching the pumpkins soar!

The Carleton Farm also had a corn maze and was preparing for haunted activities for Halloween. They have an extensive website listing all the October fun planned.

2 thoughts on “October is the time for pumpkin picking”